U.S. Department of Defence has always been at the forefront of 3D printing technology. They have spent huge amounts of R&D fund to do develop new 3D printers and 3D printing materials. 3D printing has huge implications in defense and art of warfare. Recently, U.S. Department of Defense released details of a powerful and versatile new 3D printer called MultiFab. This 3D printer can print up to 10 materials at once and embed electronics, circuits and sensors directly into the object thereby creating finished products from spare parts to war missiles, directly in the field. This 3D printer was designed by researched at MIT’s Computer Science and Artificial Intelligence Lab (CSAIL). The printer would retail for just $7000. At this price, this printer is significantly less expensive when compared to other multi-material 3D printers that cost as much as $250,000.

Apart from the low price point of this printer, there are two important features that set MultiFab apart from other printers in the market.

First, it is the first printer to use 3D scanning techniques from machine vision. It runs a loop of continuous 3D scans that allow it to self-calibrate and self-correct in order to maintain print accuracy. For each layer of the design, system generates 3D scans to detect errors and “correction masks” to clean them up, eliminating the need for operators to fine-tune the settings themselves. MultiFab also delivers a very high resolution at the level of 40 microns – less than half the width of human hair.

Second, the embedding feature allows the printer to include complex electrical pieces, such as sensors and circuits, during the initial printing, again eliminating the need for manual assembly and reducing cost and waste.

According to Javier Ramos, research engineer at CSAIL and c0-author of research paper presenting MultiFab, “The platform opens up new possibilities for manufacturing, giving researchers and hobbyists alike the power to create objects that have previously been difficult or even impossible to print”.

Though the printer is able to print various kinds of products, it’s the military applications that gained the Department of Defense’s (DOD) attention. “Before a warfighter can print a missile in the field, you need quality, controlled processes to fabricate all the component materials,” said Chris McCarroll, director of the National Additive Manufacturing Institute. “The hard part is then making the connections between these components, as an example, the integrated control circuit that receives the command to light the fuse.”

This technology saves military significant time and money and also reduce waste by providing soldiers the ability to machine parts on-site, even in remote locations rather than waiting for manufacturing and delivery from around the globe. “The potential impact in scaling advances manufacturing across the defense enterprise cannot be overstated,” said MCarroll. 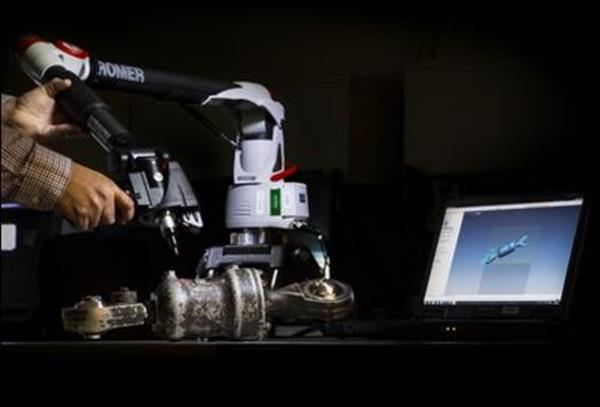 3-D scanning technology is used to create models for visualization, prototypes and reverse engineering.
Photo courtesy of the U.S. Army