To all those needy ones out there who have been suffering from some sort of disability 3D printing technology must have come as a boon to them. Technologist have come up with impressive innovations that have helped the people (especially children) and undounbtedly given them a lot of moral boost. While such developments were taking place at different parts of the world, a family was inspired to give ample attention to one form of disability which hasn’t been reported as a 3D printing innovation till date – blindness. That’s right. San Diego couple Jason and Dori Walker’s daughter Layla is born blind. Though she’s a happy kid, but the eight graderhad troubles understanding mathematics.

The couple already had 2 kids when after an emotional crisis in the family they decided to adopt – ‘When we started having kids and got married, we had two kids and lost a third one. We decided at that point to just adopt. My wife found these kids on a video on the Huffington Post. They were a set of three children, thirteen, ten and seven. They were looking for a forever home,’ Jason told. 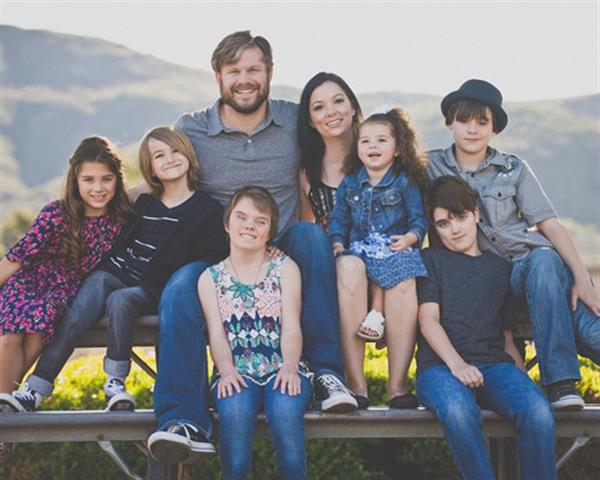 Beautiful photo of the Walker family; Layla at the center

As told earlier, Layla was having difficulties with her maths grades, but thankfully father Jason owned a ROBO 3D printer at home. With that Jason would print intangible concepts to physical educational objects, like fractions. Jason said,  “I started 3D printing pieces of pie and take them down to her and explain that this is a third and this is a sixth. Because in her mind, she thought that a sixth was bigger than a third because the number is bigger”. Layla explains, “I see with my hands so some ideas are hard, fractions are cool. And then geography was easier once I could feel the earth“.

Layla likes busses. So there will be times when she’ll want a bus and after some time she’ll actually be able to possess one – “I thought my dad bought it at the store. I asked for a bus and then a few hours later I could touch it,” Layla said

It has been a while since it has been proven that 3D printing object is no longer used just for prototyping, it has other important applications too, like that are used to education easier for the needed ones, like we see in case of Layla. 3D printing companies across the globe have taken heart-warming initiatives where they have donated 3D printed educational objects to blind institutes.

Even we, members of think3D, have been involved in a from-the-heart charitable task with an institute educating blind children. In this project we have converted different educational concepts like that we have studied in physics, biology, mathematics and other subjects into tangible 3D printed objects. The outcome of this effort was that these school children were able to touch and feel those shapes and understand far more clearly. As you’d know that studying needs at times to see things, like we had at our school and college labs, or demonstrations given by professors and lecturers during class, so why should a blind child be deprived of such convenience. 3D printing is surely giving examples we are assured that good people exists and they are there to help one another.