3D printing technology has been literally a dream come true for technology innovators and new age entrepreneurs. With the backing of Kickstarter and 3D printing they are able to launch many innovative products that has proved to be useful for the users also. Using this opportunity three entrepreneurs from Greece brainstormed and came up with something very unique and innovative at the same.

Stikey, 3D printed in polyurethane, consists of a built-in magnet which can get attached to a small and thin metal tab of around 0.2 mm. You can place this tab at the back of your smartphone or smartphone case. This magnet allows you to mount your phone on a wall while you are probably charging your phone’s battery or taking an online cooking class from your smartphone. 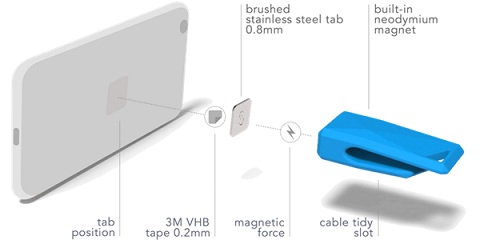 “We developed Stikey in order to enhance our smartphone experience and add the element of versatility in the way we use them,” said the designers on their Kickstarter page.

“Another important aspect of our design approach was portability. We wanted users to have Stikey with them at all times in order for them to benefit from its features whenever needed. We have analysed different user profiles and developed several concept designs. From the initial concepts we moved on early prototypes which we tested with users for functionality and form.”
“We have carried out a detailed production and delivery plan for Stikey and are committed to stick to it and send out rewards ASAP,” they said.
The conclusion of the kickstarter campaign for the trio seems very bright because they’ve already reached £9,879 of their £12,000 goal.
3D printing technology has been extensively used by many zany inventors, producing low cost and good quality products.