Even though survey has shown that 1 in every 4 people are okay with having 3D printed food, yet some food entrepreneurs and food manufacturing companies did not seem to lose faith in the 3D printing division of food making technology. 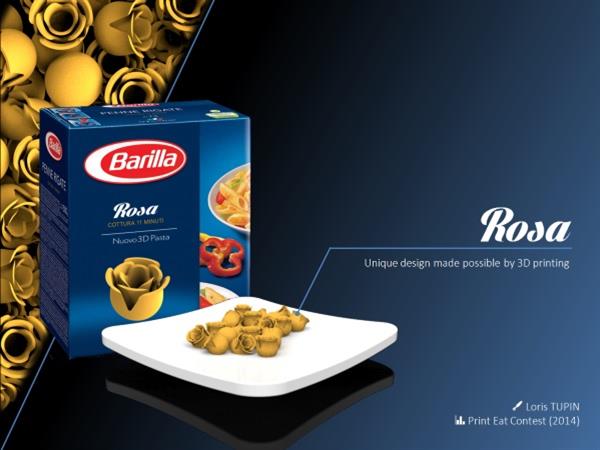 Back in 2013 Italy based Barilla, one of the oldest pasta makers in the world,  and a Dutch tech company TNO Eindhoven have been working together to make 3D printed pasta. In August 2014, Barilla announced a 3D modelling competition “Print Eat” where people from all over the globe were given an opportunity to present their own shapes of pasta. Out of the hundreds of entries French designer Loris Tupin seemed to have gained the jury’s attention. The speciality of Tupin’s pasta was that it turned in to a rose shape once it is boiled in water.

Experts at Barilla are positive that sooner or later the traditional pasta lovers will accept this change in pasta making. Meanwhile CEO of Thingarage and 3D printing expert, Antonello Balestieri, who also collaborated with Barilla in this 3D printed pasta making experience, said ‘As for pasta, I am pretty sure that in Italy it will be appreciated. It’s true we are a traditionalist population on this matter, but we are also a population of innovators and curious people. So I am sure that this will be one of those things we will be experiment with pleasure.’ This statement coming from an expert should be able clear lot of doubts about 3D printing food, especially, making of pasta.

If you want to read more on 3D printing news on food manufacturing you can click here.