Becoming a mother is one of the heavenly experiences most women seek in their life . Most would-be parents eagerly await the day when in an ultrasonography examination they would get to have the first look of their unborn child still resting in utmost peace in the mother’s womb. Undoubtedly the joy they experience while having the first glimpse of their child cannot be expressed in mere words. But for a blind parent, experiencing this happiness can only be a dream. This does not undermine the strong connection they feel with the baby.

But recently 3D printing technology seems to change everything. It is showing signs that it has the capability to make a blind mother’s dream of “seeing” her child a reality…..Well almost.

Tatiana during her ultrasonography

In an advertising campaign, Huggies Brazil shows a clip where a blind mother was suprised, and extremely happy to touch and feel the 3D printed sculpture of her yet-to-be born baby when she visits her doctor for an ultrasound scan.

Tatiana Guerra became blind when she was 17. Today she’s a 30 year old grown woman and is also 20 weeks pregnant. She came to meet her doctor for an ultrasound checkup. While they both got into a jolly conversation, Tatiana expressed her curiousity to know how her son Murilo looks. Tatiana gets into her own flow of describing Murilo’s “potato” like ears and chubby arms and how she thinks he might get his mom’s nose. After 15 mins of the scan, ultrasonographic images of her son were sent to get 3D printed. 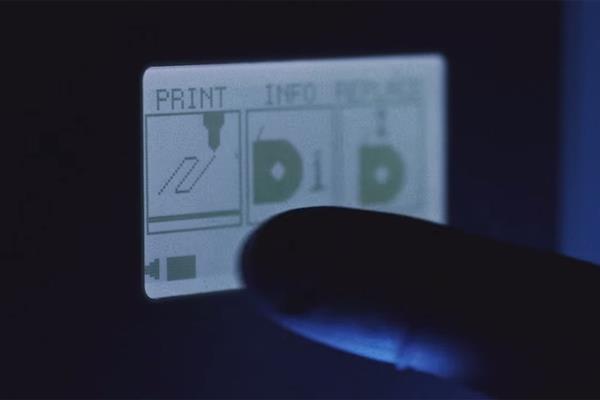 After receiving the image the 3D printing starts

After some time when the 3D printed Murilo’s sculpture arrives, Dr. David asks Tatiana, “If you could touch your son then would that let you know how your son looks like?”.. The moment Tatiana says “Yes.” David hands over the sculpture, wrapped in white cloth, to her. While a confused Tatiana tries to figure out what she was holding in her palms, David tells, “That’s your son”. Tatiana was in absolute disbelief to realize what she was experiencing and at the same time her happiness knew no bounds. Tears were flowing over her cheeks as she felt the braille reading “I am your son.” Tatiana’s dream has finally been realized and she could embrace it too.

Tatiana reading the braille “I am your son”

She feels his eyes, nose and the face

A heartwarming ad campaign like this could move millions and at the same, re-establish the trusted relationship technology has with a man’s existence. This video, which got over 850,ooo views in Youtube in over a week, is designed by Mood, a Venezuelan advertising agency, for its client Huggies, Brazil branch. Director of Huggies Brazil tells, ‘As a brand, Huggies considers each moment of this new phase in the lives of many women.” He adds, “Huggies believes that such protective embrace and bond help babies grow up happy’.

‘When I put my hand on my stomach and feel his little head on the other side, his little hands moving, it’s as though we have superpowers and nothing could hurt us,” -Tatiana.

Technology is not above human emotions but it’s very existence is to be a part of it and make lives easier. 3D printing technology has been changing how we used to dream. With its countless applications, it has proved that dreams can actually come true. At think3D we are amazed to witness how 3D printing technology is making things possible. We are sure like Tatiana’s, it will fulfill every blind mother’s  dream come alive, no matter where they come from.