We have seen numerous developments happening the field of 3D printing technology. Hobbyists and innovators from all over the world have been using their home-based 3D printers to produce interesting and at the same time useful objects.

Scientists have always been trying to build technology that can help the human race for at least a century or two. But 3D printing technology helping to determine such facts?!! It can something that’s been heard for the first time… It turns out that a scientist recently built solar-powered motors that can run for the next 100 years, even if it’s left unattended.

3D_Printing made two EZ Spin motors using 3D printing technology and he is confident that these two solar-powered motors is durable for the next 100 years, non-stop. It is understandable for anyone who is hearing about such news for the first time the first two questions that arise in his or her mind is that of the durability and that of the power.

Information about the motors:

These two identical power motors features 5V solar panels along with a circuit board in each panels, however, one (the smaller one) consists of one diode and one 5V super-capacitor and the other, the slightly bigger one, consists of four diodes and four 5V super-capacitors. This indicates that one is four times powerful than the other. The two motors spins in opposite directions from one another 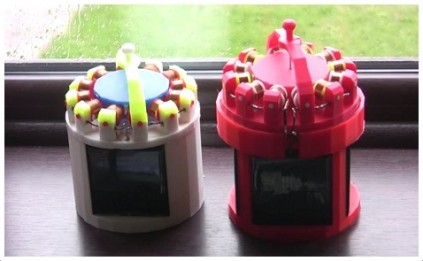 The function of the diodes is that it prevents the solar panel from discharging energy during the absence of the sun. During the day-time the machines runs off of power from the solar panels, i.e., directly utilizing the sun’s energy. Even during winter the solar panels are expected to power the four AA batteries, present on the bigger (red-coloured) motor, so that both the motors function seamlessly during winter. “I decided it was a safe bet that the sun would be shining for the next 100 years so I might as well capitalize on that free energy source,” the narrator says.