When it comes to designing musical instruments using 3D printing technology we have seen how MONAD Studio And REIFY have  created aesthetic 3D printed instruments, which can be really difficult making them manually. It’s highly time consuming and the designs may not as perfect as you want it to be.

It turns out that songwriters and band singers have are adopting 3D printing technology for their own benefit. Canadian band Secret Broadcast recently used 3D printed their musical instruments like guitar and in an interview singer of the band Matt Lightstone told. “About a month ago, we were having a few drinks while brainstorming some ideas for our new video when we overheard someone at the next table discussing 3D printers.Five minutes later we had our concept. We thought it would be a blast to make our own 3D printed instruments and record a song with them.”

The band used GoPro cameras to shoot the video of their single “One Born Every Minute”. The uniqueness of the video of the single is that it features the 3D printing process of the guitars, along with that the video would also have clips of the recording of the track.

In case you are a music or a fan of Secret Broadcast then it might interest you that their music video will be produced by Grammy-award winning producer Adam Kasper who’s produced Aerosmith, Nirvana, R.E.M, Pearl Jam, and many more.

“Agile Manufacturing and 3D Systems were nice enough to help us print the instruments,”Lightstone told. “We then went to Dream House Studios in Toronto and recorded a song live off the floor. It took our engineer a little while to dial in the right sounds, but in the end we were all really happy with how the recording turned out.”

Not just musical instruments, even jewellery were designed using music tone. To know more, click here,  3D printing is proving time and again that it has the full potential to make impossible possible, we are sure of that ! 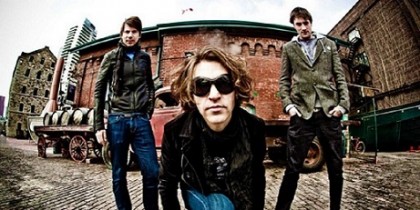